The Value of Lighting Design

13 Oct The Value of Lighting Design

Posted at 14:49h in Blog, From The Lighting Trenches by Lana Rice 0 Comments
0 Likes
[social_share]

The Architect, The Lawyer and The Value of Lighting Design 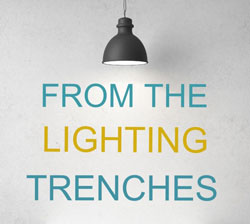 I was once in a meeting with an architect and his client where the conversation was about space planning. They were talking about a stone feature wall set at the far end of the office space. The stone wall at the of the hallway was meant to be a focal point that would pull visitors down the office toward the meeting areas. The stone hadn’t been decided on yet, but it was considered a key.

“Every law office has wood paneling, it’s the standard, I want something that will stand out and make our clients know that we aren’t a typical stuffy corporate attorney.”

This lead to a discussion of the carpets and the nature of semi-private offices, semi-smoked glass that allowed for privacy when needed. The two conference rooms were more critical than the partners having large offices. The conference rooms would have large media displays, touch screens if possible.

“I’m not sure what they cost (this was 7 years ago or so) but there has to be some kind of giant iPad we can put up there.”

Eventually, it came time for me to talk about the lighting and controls. It was an initial meeting so I didn’t have a good sense for the design direction. The rest of the conversation had been freewheeling so I felt it was OK to throw ideas out there.

“Well we have to decide if we want the light sources to become part of the design or disappear as much as possible,” was my opening gambit.

“Let me stop you right there,” the client interrupted.

“I’m spending a lot of money on stone and glass, they’re ripping that whole thing out (he said gesturing vaguely) I’m not going to spend a ton of money on fancy lights.”

I’d heard things like this before, clients who didn’t know the value of great light. I’d been hired by the architect as a consultant, and the end user simply didn’t understand why a lighting designer was involved. What I couldn’t articulate in the meeting, but have thought about ever since is how I should have responded to that end user.

This is what I would have said:

I understand that how much you are investing in this office. It’s the future of your company embodied in stone and wood and carpet. You’re trying to build a space where you, your partners and your associates will do their very best work and impress your clients. You deal with sensitive information every day and you work long hours. So let me ask you…

You don’t need fancy lights, but you do need well chosen lights that will take all of the other things you’ve chosen and make them look, feel and function perfectly.

That’s what lighting designers do.

Sorry, the comment form is closed at this time.